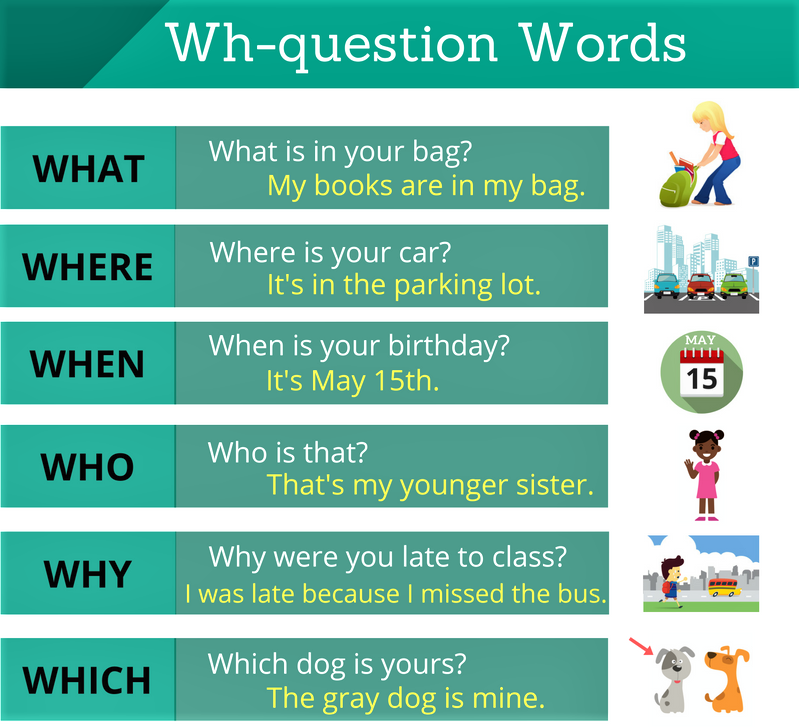 The ‘Wh’ question words in English are who, what, where, why, which, when.

Who is for people, what is for things, where is for places, why is used to ask for a reason, which is for specific things, and when is for time. Here are some examples of how each ‘wh’ question word can be used in English.

1. Who. As we know, it’s used for people. ‘Who are you?’ is a question when we either want to know about the person. We can use it in any situation where people are involved, and it has many variations, such as whoever, whose, etc.

2. What. What is used for things, such as names, and inanimate objects. An example of a question using ‘what’ is ‘what’s your name?’ ‘what is this?’ ‘what time is it?’.

3. Where. Where is used for asking about places, and the location of things. It can also be used to ask people about their hometown or country of origin. Some examples of questions using ‘where’ include ‘Where are you from?’ ‘Where is the remote?’

4. Why. Why is used to ask for a reason. Someone could say ‘I’m tired today’ and if his friend wants to know the reason, he will ask ‘Why are you tired?’. Other examples include ‘Why does he snore so loudly?’ and ‘Why is the sky blue?’

5. Which. Which is used when we want to find out the type of thing, or when we need to make a choice between two things. Questions containing ‘which’ include ‘Which pen do you want, this one or that one?’ ‘Which soup do you prefer?’

6. When. We use when in asking about time. Let’s say a bus is arriving at the bus stop and someone wants to know how long it’ll be. Instead of asking ‘How long will the bus be?’ They can simply say ‘When will the bus arrive?’ Other examples of ‘when’ include ‘When’s your birthday?’ ‘When does the film start?’

Thank you for reading this blog! As always, please do book a Free Trial Lesson with us here at Crown Academy.