English with the Direct Method 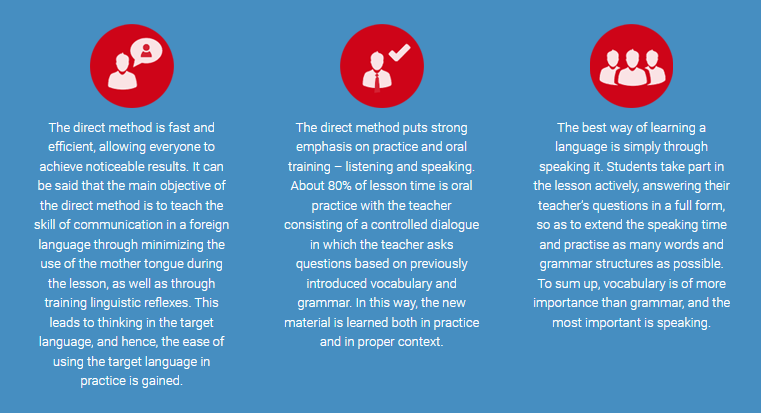 The direct (or natural) method can be seen as the oldest and the most practised method in human history, if we consider that it imitates the mother tongue acquisition process, the method which was practised and naturally improved over centuries.

The direct method mainly focuses on speaking and listening skills, new vocabulary is taught by demonstration, pictures, miming or deduced from the given context a new word appears in. Basic vocabulary is given first, so that students can start communicating and speaking in a target language as soon as possible. Contrasting with the learning of wordlists from a dictionary or other written source, new words are listened to first and mastered orally, the student may not even know a word’s written form at the beginning. Also, as the vocabulary is not explained using the learner’s mother tongue, a direct bond is established between the words and their meanings, without an interference of the learner’s native language. Grammar rules are not given explicitly and are taught inductively instead, the student has to figure out the rules by practising a language orally and getting corrections from a teacher.

During a lesson all the new topics are introduced orally. So the direct method puts great emphasis on developing speaking and listening skills. Although variations of direct teaching may address writing and reading skills to some extent, generally the direct method pays little to no attention to them. This property of the direct method also explains why the percentage of the population who do not know writing and reading was so high in the past, when the direct teaching of language in an informal environment, as practised by parents and families raising their children, was the only method of language learning available to the broader public, so the mother tongue was acquired in exactly this way by the new generations, as is the case today. It should be noted that reading and writing is learned mostly in schools nowadays, but when a child goes to school for the first time, he or she already has at least some speaking and listening skills acquired by the ancient natural way.

The method is very efficient in what it does well, and it can be used to learn spoken language efficiently, extend vocabulary, fine tune pronunciation and even improve grammar without learning all the rules, as native speakers learn it. As an additional bonus, the direct method allows a relatively rapid learning process, which is an important quality for teaching method if a time constraint is present. If all the learner wants is to learn a spoken language, then using solely the direct method is just fine, however, for the best results in a general case and for full coverage of the four language skills, the direct method must be used alongside some other method.